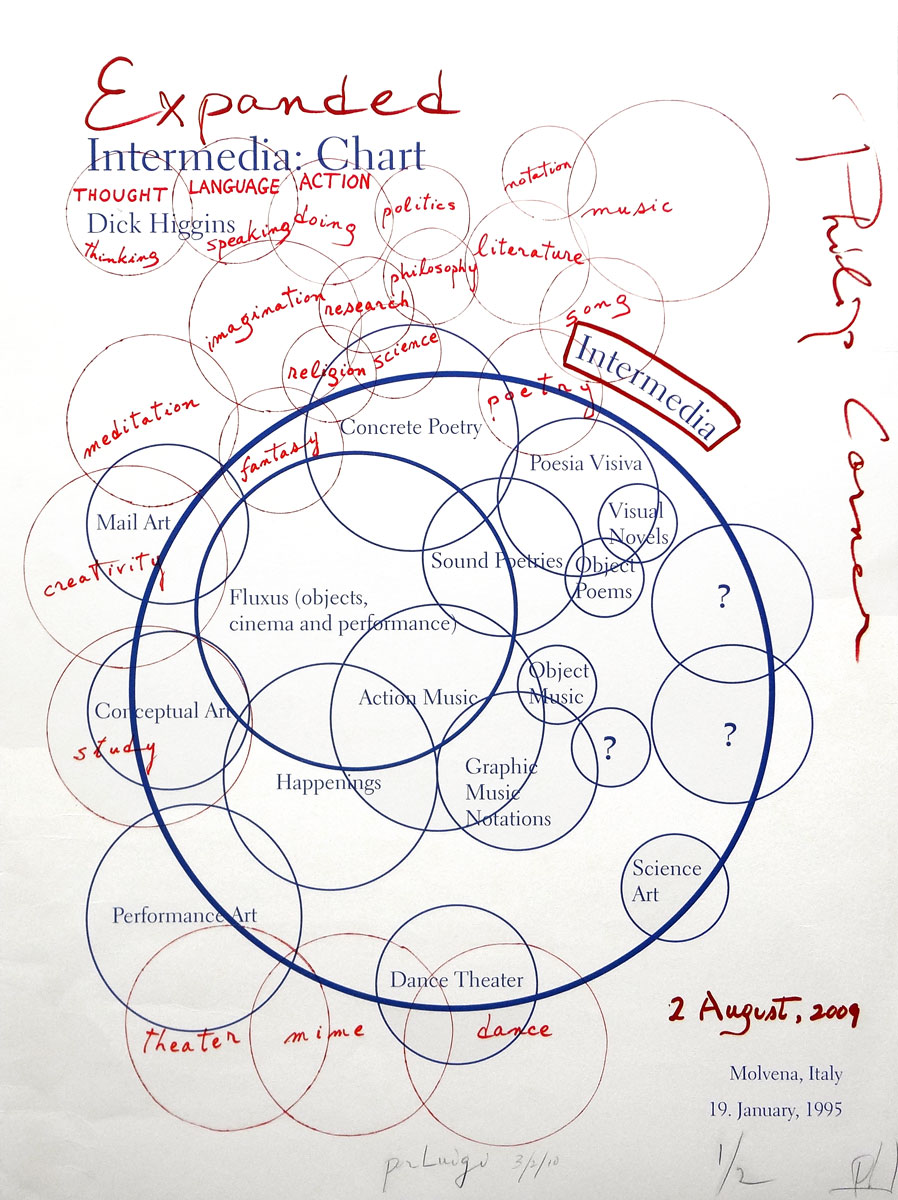 Define in your own words intermedia – by itself, and vs multimedia or video work or whatever else

Intermedia describes both a process of combination and filtration. Working within and at the edges of the specific media, one cannot help but experience the overlapping influence of various practices.

Ideas can be realised using numerous methods and each can be an influence on other methodologies. Intermedia can effect many disciplines – the obvious would be painting and photography * sculpture and architecture or the less obvious walking and literature * biology and music.

The tendency is to think in terms of combinations but if you introduce the possibility of filtering you can begin to realise interesting ideas – just think of one thing through another. Perhaps painting through rock climbing.

In conclusion: Working at the boundaries – allows influence, ideas and methods to migrate. Once you think between media then different things can happen. Artists and commentators like John Cage, Buckminster Fuller and Gene Youngblood would think and teach from a place that was both distanced from normal methodology and embracing of multi-diversity, openness and non-specificity. Intermedia is the preferred term to describe this process as it can utilise any media, in any way; fully embracing the influence within or between multiple independent media.

Dick Higgins, the composer, commentator, poet and early Fluxus artist was influenced to popularise the term having read and published works by Giordano Bruno whose essay on the ‘Art of Memory’* he regarded as an early text on these ideas. Although Higgins has said that it was Samuel Taylor Coleridge who first used the term.

The illustration below gives some idea of what Higgins imagined – the American composer Philip Corner has extensively amended this particular version. 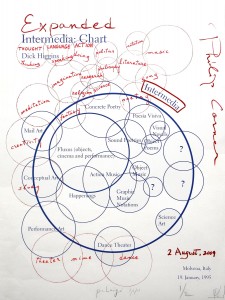 Multimedia, on the other hand, has gained some specificity regarding method or outcome and so is less useful when regarding unfettered, open and diverse working systems or strategies.

How is a work a Metaphor.

This is a PhD question in itself… in regards musical analysis we constantly require language to refer to something else as a way to describe what is happening in music. This language is often used to describe the emotion of the music or more accurately the emotion we assign to the music.

We can perhaps accept this process of employing emotional metaphor to describe both the music itself and even perhaps its function. However, it is also one of the main criticisms of aesthetic analysis is that we tend to rely too heavily on emotional language in conveying our ideas.

Metaphor is clearly apparent in all analysis. It is an extremely useful way to probe into ideas around music; we can also be too literal in our appropriation of metaphorical ideas. Perhaps we can explore the use of nuance in language to probe more deeply. Also, as music becomes more complex both in the way it is constructed and in the way it sounds we need different language to describe it. Maybe language alone is not sufficient.

If we can use language (and other artistic practices) to describe music successfully then we should by all accounts be able to use music to describe things – and quite complex things.

By combining music, photography, graphics, text, video etc. we can extrapolate a working method for analysis and understanding through metaphor.

From the gut: inspiration and the urban experience.

The city can represent so much, maybe too much. We experience the city sometimes in our daily lives and sometimes as a fragment. Sometimes it envelops our very being and sometimes we can stand back from it and view it from a distance. For many people it is about identity and connectivity, they feel inseparable from the place – we have heard the city described as lifeblood.

Reading about the history of London one becomes aware that it exists not because of town planners or bureaucratic departments or large corporations, the city exists as it does because of the people who inhabit the space.

I am a Londoner who harbours a deep desire to return. I am not completely sure what drives this desire but perhaps this project could go some way to explaining what it is that keeps drawing me there.

It is the duality of anonymity and that sense of belonging that the city can evoke in which I am particularly interested; I believe there is commonality in this experience for inhabitants of urban spaces all over the world.

Many artists have been inspired by their own experiences of the city and the people who live, work and visit; painters, writers, filmmakers etc. and their best work can resonate in a very personal way with other urban dwellers.