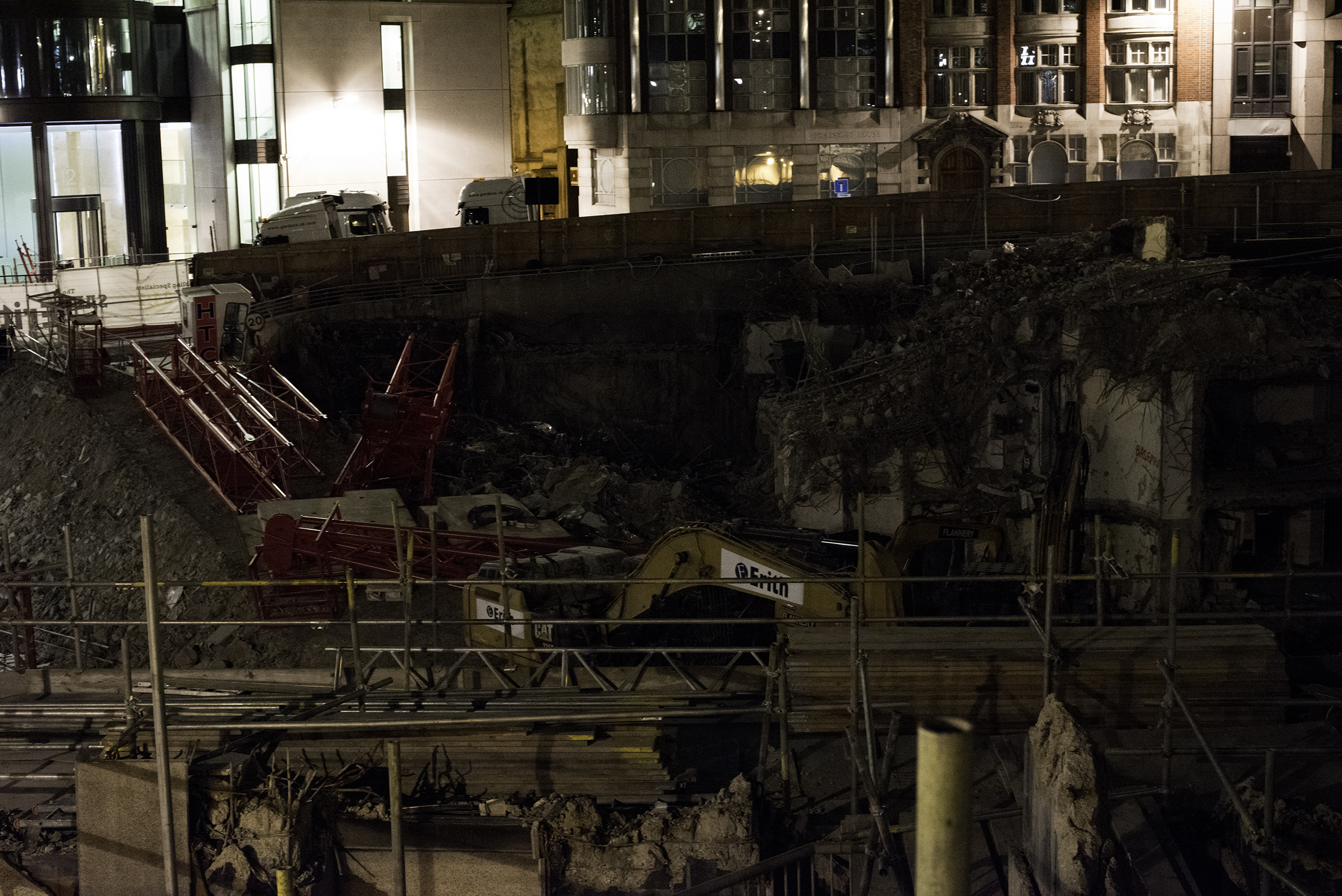 I read so slowly and forget so much…

London: The biography by Peter Ackroyd

“The image of London as a human body is striking and singular; …of a young man with his arms outstretched in a gesture of liberation; …embodies the energy and exaltation of the city continually expanding in great waves of progress and of confidence. … London is so large and so wild that it contains no less than everything… …So we set off in anticipation, with the milestone pointing ahead of us ‘TO LONDON’…”  ( from p.1&2)

Observer review: ‘Nobody in their right mind would have invented this London, the London we know. But nobody, I think, can subdue it now’.

Walkscapes: Walking as an aesthetic practice by Francesco Careri

From primitive nomadism to modern art, here we have the narrative that perceives the landscape through a particular history of the traversed city.

The text speaks of the difference and interrelation between the nomad and the settler.

It talks of the importance of the path – the first marks made by man on the earth, the first implied architecture. Walking as need and symbolic gesture, modifying the world through action.

…simultaneously an act of perception and creativity, of reading and writing of the territory.” (p.50)

The most important change occurred when man constructed artificial verticality, a physical transformation of the landscape through architecture; the menhir or the standing stone.  Interpretations for the explanation for doing so are plentiful, it is unlikely that there is one such reason. Suffice to say at this point, it changes everything… when a stone lay horizontally upon the ground it is still just a stone, but as soon as it is moved or placed then the connotations change entirely.

“…when it is raised vertically and planted in the ground it is transformed into a new  presence that stops time and space: it institutes a “time zero” that extends into eternity, and a new system of relations with the elements of the surrounding landscape” (p. 51)

While in the world of villages and the cultivated fields the erratic path had been transformed into a trail and then a road, giving rise to the architecture of the city, in the empty spaces of the nomadic universe the path conserves its symbolic elements of Palaeolithic roaming and transfers them into the sacred spaces of the Egyptian temples. From this moment on it would be difficult to separate architecture from the path. (p.57)

It is the birth of the idea of ‘interior’ space with the Egyptians, who were considered to be a stationary civilisation, first worked with the notion of menhir as volume and interior space as  the path or the structuring of the landscape. There can be seen a resemblance of the rows of stone menhirs and the rows of columns in the earliest Egyptian temples. The stones were almost certainly expressed the idea of wandering, since there seems to be no places for congregation but only spaces in which to walk.

“Up to this point we have seen that the problem of the birth of architecture, be it as a principle of structuring the landscape, or as the architecture of interior space, is connected to the erratic path and its nomadic evolution. Once this important point has been clarified, and thus once we have refuted the erroneous but common conviction that architecture is the invention of the sedentary, settled world rather than the nomadic world, we will not plunge into the subsequent history of architecture, but here at the phase of wandering, of the path seen as symbolic action rather than as a sign or object in space”. (p.66)

The end of art theory: Criticism and Postmodernity by Victor Burgin

…where visual art is placed within the framework of contemporary cultural theory rather than traditional art theory and aesthetics. Of particular interest is the chapter on Burgin’s re-reading of Barthes Camera Lucida.

Some notes: from page 71 – In a preface of 1963 he characteristically remarks that to write is ‘to become someone to whom the last word is denied; to write is to offer others, from the start, the last word’ (Critical Essays) Of course, says Burgin, that ‘last word’ offered to his commentator is itself no more than a thread in a web of texts which will grow for as long as Barthes’s work is discussed…

He discusses at some length the idea of meaning, of signifying systems, within art generally – referring to Barthes approach (broadly) and later to Saussurian linguistics (specifically). Describing how ‘semiotics’ is now more likely to refer to an ever-changing field of study where a focus on the phenomenon of meaning within society. The distinction between as Burgin puts it (after Barthes essay ‘From work to text’) ‘a work’ to ‘a text’.

“Text, as conceived of by Barthes (with the prompting of Derrida and Julia Kristeva), is seen not as an ‘object’ but rather as a ‘space’ between the object and the reader/viewer – a space made up of endlessly proliferating meanings which have no stable point of origin, nor of closure. In the concept of ‘text’ the boundaries which enclose the ‘work’ are dissolved; the text opens continuously into other texts, the space of intertextuality”.

As an example of the notion of intertextuality Burgin offers up the following:

“…a drink advertisement that shows a glass slipper containing ice cubes and a measure of vermouth; consciously or not, I am referred instantaneously to: ‘Cinderella’ (rags to riches; romantic love); ‘drinking from a slipper’ (fin-de-siécle playboys and chorus-girls; physical sexuality); ‘American-ness’ (‘on the rocks’ – for example, scenes in B-movies of drinking in piano bars); ‘failure’ (for example, an unsuccessful marriage is referred to as ‘on the rocks’); as so on. All of this, and more, belongs to fields of what Barthes calls the ‘déja-lu’: the ‘already read’, ‘already seen’, everything we already know and which the text may already call upon, or ‘accidentally’ evoke”.

Wonderfully illustrated, extensively researched. The narrative of a specific street within the broader narrative of the urban environment in which it exists. Filtered through the lens of it’s history, it’s architecture, it’s economics, politics, landscape, decay, rejuvenation and reinvention… but mostly through the people who inhabit the micro-world.

City is what it is because of the day, but for me, for some reason, the city only reveals itself by night. It is true of the best images of Rue Bernard and it is true of the images of London in London After Dark by Alan Delaney. Street lamps connote boundaries and way-marking and life absent, AWOL. Reflections in the glass shopfronts and unoccupied offices embody this land of the living asleep. The lights inside illuminate the darkness – signs of life – but of the city, more the interior of the body like pumping veins.

Flanuer – fragments of a street, it proclaims on the cover of issue three. RUE BERNARD in large red letters with the text…

I can finally look up and see. The cold had forced my face down, eyes averted, the senses dedicated to navigating the weather. For weeks I saw nothing but white and grey but with the increasing warmth my whole body has opened up…

Like a caterpillar emerging into the sunlight as reborn, re-imagined the cocoon of winter is being lifted, broken away… for city dwellers this is a shared experience – maybe for inhabitants of Rue Bernard in Montreal it is a different kind of butterfly.

I want to talk more of this magazine, which becomes more interesting as I live with it… unlike most periodic journals there are interesting little nooks and crannies that appear as you navigate the pages. What seemed initially as impenetrable or hidden reveals itself slowly over time and with familiarity. Much like a city street itself… I’m hooked.

London After Dark by Alan Delaney

A book of extraordinary photographs of a city at rest. These images were made over a few years at a time of night when even London, it seems, is devoid of movement, human life. The city however is very much alive in these images… street light defines the shapes we see the natural world is absent.

My Winnipeg by Guy Maddin

Special mention: The docu:fantasia My Winnipeg by the director Guy Maddin. A personal journey through his love/hate of his hometown… beautifully and seamlessly put together from fragments of found footage, personal archive and newly shot material.

Of Time and the City written and directed by Terence Davies

Similarly, the docu:poetic work of Terence Davies here describing his home town of Liverpool. Narrated by Davies throughout with interludes of music which seem so personal yet, concurrently, universal; both as a reference point for Davies himself and the city on which he is reflecting.

Taking more from the personal essay than the traditional documentary, Of Time and the City is made up almost entirely of found footage that illustrates the memories of the life Davies knew, starting with life in the port city and its inhabitants just after World War II and ending in the year 1973, when he moved away. Most of the footage is from old newsreels that show, at least in the first half, the people of the era, old and young, working and playing, walking or just sitting. There are many very moving shots of old people, their wrinkled faces and slow-moving bodies serving as reminders of time passing.