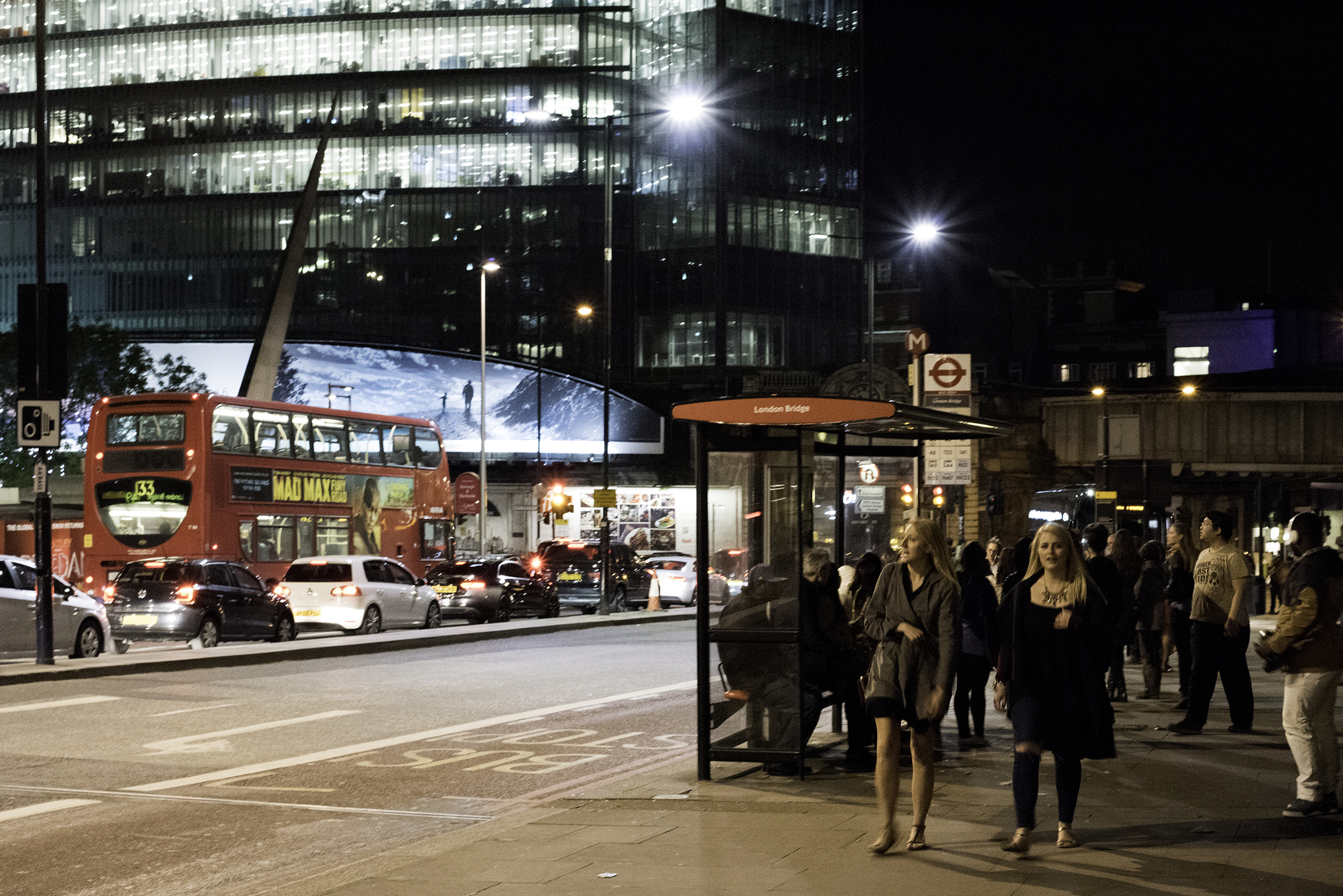 Notes and extracts from this quite wonderful book… by Ricciarda Belgiojoso:-

…A few years later, in 1957, at the National Association of Music Teachers Convention in Chicago, Cage claimed that a piece of music is made up of the sounds indicated in the score and by those that are not, which are therefore notated silence. He proposed a comparison with architecture and sculpture. As for Mies van der Rohe’s glass buildings, which we see together with clouds, trees, grass and other nearby elements, and as for Richard Lippold’s iron wire sculptures, which we inevitably see together with people and objects standing around, so music takes possession of its surroundings. External elements become part of the work, and they change in relation to different contexts.

Another interesting electro-acoustic musical piece conceived to be broadcasted on the radio is Ritratto di città , Portrait of a City, composed in Milan by Luciano Berio and Bruno Maderna in 1954 (Berio and Maderna founded the Studio di Fonologia della Rai in Milan the following year). The subject is the city of Milan. We hear the deserted streets at dawn, the courtyards, the canals, cats on rooftops and other typical situations of the city. It is an acoustic portrait of the metropolis, throughout the 24 hours of a whole day.

Schaeffer distinguishes four ways of listening and considering our relation with sound. Écouter means listening, i.e. paying attention to the sound of something and finding its source or cause, treating the sound as an indication of the cause that produces it. Ouïr refers to our perception through our ears, meaning the sound that reaches our ear. Entendre means manifesting an intention to listen, selecting what interests us. Comprendre , finally, is understanding the meaning of a sound, interpreting it as a sign that refers to a code. 5

Shaeffer’s music research program was based on solfeggio, the art of practicing listening. Once again, he proposed an experimental and concrete process, excluding predefined statements with the intention of acquiring appropriate knowledge about sound objects. He presented a series of tools to classify sound objects with, so as to analyze them and identify their distinctive characters. The aim was to be able to describe sound objects in detail. The result was a systematic descriptive solfeggio to be applied to the whole universe of sounds, conceived to practice hearing, free from notation systems, founded on the ear’s perception of physical signals. The research program was articulated into five operations: typology, morphology, characterology, analysis and synthesis.

The study of the evolution of a soundscape and the evaluation of it’s sequemce of events in time require adequate techniques and analytic methods to be applied, for example those employed in the world of music. (p.34)

Visual art abandoned the institutional venues such as galleries an museums and turned to unprecedented locations. Landart, minimalism, Conceptual Art and Public Art helped shift the focus from discrete dimension of the artwork to an open, interactive dimension, contingent and contextual, directly referred to a specific context. … Artists occupied public spaces and talked to a wide audience, artworks depended on real public spaces. Michael Heizer, Walter De Maria, Robert Smithson, Richard Long, among others, investigated the possibility of producing art at a larger scale. (p.35)

Keynote is a technical term used in music to define the principle tone… always implicit, always present, even when in certain moments it may be dominated by other tones. Keynote sounds are constant sound phenomena of a certain context.

Signals are foreground noises. We listen to them consciously. The term is derived from the theory of communication: a signal is a sound that attracts our attention, like message codes and information transmission. Bells, whistles, sirens.

Soundmarks (as landmarks) are unique objects and specifically belong in a certain place.

Sound events are rich in sense, they have strong symbolic importance, they evoke an individual response.

Archetypal sounds (according to Jung’s psychologic types) are always interpreted by human’s unconscious with the same meaning, all over the world.

Schafer distinguishes between hi-fi and lo-fi soundscapes. In hi-fi soundscapes the signal-to-noise ratio is favourable: we may clearly hear discrete sounds, because background noise is low. Signals surrounded by a strong presence of keynotes and even an imperceptible sound can communicate information. Sound components are complex, akin and organized enough so that keynotes, signals and soundmarks do not mix up. (p.36)

Generally, rural soundscapes are hi-fi and urban lo-fi… and generally the same soundscape considered at night is of higher fidelity than during the day. An urban environment reduces the possibility of aural and visual perspectives, because we cannot perceive distances, only presences.

In The New Soundscape, Schafer writes about schizophonia, a term coined to indicate the fracture between a sound and its electro-acoustical reproduction brought about by the electric revelation. Thanks to new technologies sounds may be reproduced and amplified, de-contextualized, dislocated in space and time, extrapolated from their original surroundings and placed in any other context. Sound may be distributed in space with spatialisation techniques; all acoustical environments may be transformed in others. All these are the consequences of acousmatics, already discovered by makers of concrete music. (p.36)

Acoustic Ecology studies the effects of soundscape on the physical responses and the behavior of man; it regards sounds, life and society.

Soundscape is considered as macroscopic musical composition that evolves around us; its form and orchestration need to be considered; (p.42)

Schafer – Ear cleaning: Notes for an experimental music course(1967) and A Sound Education, 100 Exercises in Listening and Sound-Making (1992)

Cage – first to draw our attention to the sounds of the environment.

Schaeffer continued in this task systematically, with technical support and introducing useful concepts to interpret the soundscape… … and to modify it.

Schaeffer set up methods to analyze singles ounds, Scafer succeeded in considering soundscapes as a whole, proposing methods to actively listen to the surroundings and think about possible ways to correct them. (p.43)

Investigating a plurality of possible meanings in an urban space. (p.48)

O+A (Bruce Odland and Sam Auinger) Tor (1992) Sounds of traffic in a tunnel with the sounds of the engines removed through filtering. Resonant frequencies and Doppler tuning remained…(p.62/3)

…resonating vases… pitches are extended if they correspond to the resonating frequency of the vase. Hermann von Helmholtz – analyzing the different components of complex sounds.

Bill Fontana – Moving sounds from one environment to another. Acoustic paradox, de-contextualizing the familiar whose meaning had been altered. Brooklyn bridge sounds – car noise, wind etc. – to the World Trade Center plaza where there is no traffic noise. (p.71)

The white noise of a water fountain can mask the sound of traffic due to the harmonic complexity of the sound.

Bill Fontana in 1976 recorded sounds in a harbor with 8 microphones and diffuse the sound with 8 speakers in a gallery.

The idea of rendering the spatial complexity of the pier’s aural perception through holographic reproduction suggested the artist to interpret his work as the manipulation of volumes in space. From now on, he would define his works as sound sculptures… … to interpret them as sculptures and architectures, articulated in the three dimensions of space together with time. (p.77)

We listen to sounds with a certain curiosity; on one side, we try to recognize their origin, and on the other side, acousmatics makes us consider the aspects to which we hadn’t previously paid attention. We reflect upon the transformation of the acoustic meaning that a familiar sound may acquire according to the varying surroundings. (p.77)

Max Neuhaus – Series of works named Walks referring to the practice of exploring the urban environment on foot. (…with the word LISTEN written on the hand of every participant) (p.79)

…is based on the construction of sonic experiences, the premise being that the ear provides crucial information for our existence and that such information is not perceptible by sight. The impact of the sonic aspect of the environment on our perception has at least the same importance of the information captured with our eyesight: visual and aural perception are necessarily complementary, though often, in architecture the latter is ignored.

Acoustics is not merely intended as a corrective science any more, and noise is not just treated as an enemy to eliminate: a more complex approach to noise emerges, acknowledging the importance of sound in affecting our lives and the opportunity of integrating sound in architecture. (p.97)

For each sound we must consider its source, the effects of the space, the social aspects of the users (their social and demographic characteristics and the acoustic condition of their usual surroundings) and physical conditions, such as temperature, humidity, lighting and visual, landscape and architectural characteristics.

For each source we should consider its level of sound pressure, its spectrum, its time conditions (variation during the hour, the day, the season, duration and impulsive characteristics), its location, its possible movement, its psychological and social characteristics (the meaning of the sound, whether the source is natural or artificial, the relation to particular activities, whether it should be considered a soundmark, if it is holistically descriptive, and so on)